Jun 05, 2014
Justin Time gets Dedicated Store on CafePress and Agent in Turkey 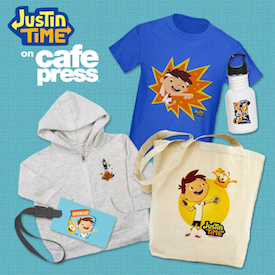 Leading on-line retailer CafePress Inc. (NASDAQ: PRSS) will launch a Justin Time store on their website in June 2014. The store will offer multiple categories for toddlers and kids including apparel, home decor, wall art, and accessories, featuring a range of vibrant product designs.

“CafePress has become the go-to resource for partners seeking unparalleled fan engagement and expansive product selection," said Ty Simpson, Vice President of Business Development for CafePress. “CafePress is where people can go to find interesting products branded with what they love most – and preschool kids clearly love Justin Time! Both its popularity on TV, and it’s bright, graphic design, make Justin Time a great choice for CafePress.”

The store will also be available via Shop Sprout online. Justin Time is one of the top-performing preschool shows on Sprout in the US, and also airs in over 75 countries worldwide.

In Turkey, Kaynak Licensing has joined Justin Time’s global network of agents in key markets which includes Super RTL in Germany and Knockout Licensing in the US and Canada. The company represents world-renowned kids brands including Felix the Cat, The hive, Everything’s Rosie, and Sid the Science Kid, among others.

“Justin Time is a beautiful preschool series that has found a loyal audience in North America and around the world,” said Hakan Tungaç, managing director, KLC. “We look forward to extending Justin Time’s licensing success to the region with equally lovely product supported with dynamic retail initiatives.”

Mary Bredin, Vice President Guru Studio, added: “It has always been our goal to create a truly global brand that not only entertains kids while watching TV – but maintains that interest beyond the screen. Café Press and Kaynak’s confidence in JUSTIN TIME’s licensing potential is testimony that both those goals are being achieved.”

In the US, consumer products for JUSTIN TIME has been expanding its presence under the representation of Knockout Licensing. Other recent product launches include DVDs from Cinedigm and apps from LeapFrog during the first half of 2014. LeapFrog released three JUSTIN TIME App bundles, including: Animal Friends (Released 1/21), Water Adventures (Released 2/18), and Hide and Seek 1 & 2 (Released 4/29). Cinedigm released three DVD’s in March 2014 to both major retailers and specialty outlets, as well as on transactional digital platforms.

Knockout Licensing will be at the Licensing Expo in Las Vegas from June 17-19 at Booth #F81.